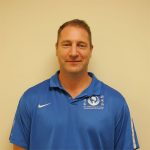 Jamie studied and trained in Wing Chun, Judo and Taekwondo before settling for Wado Kai karate in 1987.   Since then Jamie has dedicated himself to train in both Kumite (semi contact sparring) and Kata earning himself National and International recognition by winning several medals.

Over the years Jamie regularly visits Japan to train, during this time he has earned his 2nd Kyu JKF instructors licence and JKF 2nd Kyu examiners licence.  Giving him the honour to be able to grade and teach for the Japanese Federation, a rare position outside of Japan.

Jamie has also taught Rugby within the Totton Community for a number of years for locals Schools and Clubs.

He also carried on with the study of Martial Arts by training in Muay Tai and Brazilian Jiu Jitsu, again medalling in competitions after which he taught mixed martial arts for a number of years.

In 2014, he was approached to become an England Wado Kai coach, in 2016 becoming a Senior coach for junior and senior members in Kumite.    He is also the current Southern Region Coach for the English National squad.

Jamie travels coaching National and International athletes some of whom are on the Olympic pathway.   He is a recognised coach on the Olympic qualifying circuit and is a WKF accredited coach.

Jamie is the Head Coach of TKW, and teaches on a weekly basis beginners to advanced level.